Today’s post is a guest post by Karina Fabian, writer of the Mind Over trilogy and other marvelous fiction and a member of the Catholic Writer’s Guild. 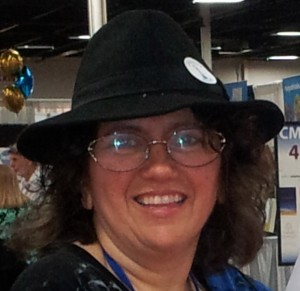 When I’m around Catholic writers, they sometimes ask me why I write Catholic fiction. Truth is, although I brand myself as the Catholic Geek, I don’t normally set out to write Catholic fiction. I just want to tell good stories about moral people having exciting adventures. The Mind Over trilogy is a good example. It’s about Deryl, a young psychic whose ability drives him insane. In the course of the trilogy, he fights his way back to sanity, teleports to another solar system, stops a war between two planets and harnesses his psychic abilities to put the planets into safe and hospitable orbits. There is a Catholic character and some pro-life themes in the subplots, but I didn’t give conscious thought to putting my faith in the story. However, looking back, I can see how my faith has informed my imagination, even in ways I did not expect.

I had the pleasure of attending Joe Wetterlings’s workshop on the Catholic Imagination at the Catholic Writers’ Conference-Live in July. He spoke of the many factors that make good fiction and especially good Catholic fiction. One of the things he listed as a quality of Catholic fiction is that the heroes take on the roles Jesus called us all to take – priest, prophet and king.

The king, of course, is a leader. The prophet is the wise man, and the priest makes a sacrifice. These can be carried by one or more characters. In Lord of the Rings, of course, you have Aragon as king, Gandalf as prophet, and Frodo as priest. These have long been the heroic archetypes, although Joe asserts that much secular literature has forgone the priest role for “the fool” instead. It’s a loss he’d like to see remedied, especially in Catholic fiction.

I’ve long asserted that much of my fiction is not Catholic, but has some Catholic elements – a worldview that there is such a thing as evil and that Good can overcome it, for example – as well as characters. The Mind Over trilogy, for example, is not written to be a Catholic story, per se, but the main character, Deryl, does take on the roles of priest, prophet and king.

King is an easy role to see. While not royalty, Deryl is considered a leader on both Kanaan and Barin, and as a leader, he brings peace to both worlds. He sets a plan into motion and people go along with it. He consults with his advisors, but in the end, he makes the decisions. As a prophet, Deryl not only has visions that propel him to take action, but he also carries knowledge others do not possess. That knowledge, however, can save them all. Finally, as a priest, he’s willing to make any sacrifice not only to save his family but both of the worlds he’s been involved with. He is even willing to let go of all the pain of his past to rescue Alugiac, who has for the most part been the villain of the trilogy.

What surprised me is that I didn’t think about Deryl in this way. I just knew the kind of man he’d grow into in the course of the trilogy. My faith worked in the background to induce my imagination to build him in such a Christ-like role. This is one of the wonderful things about our faith; if you let it fill you and you remain open, it will fill you in all aspects of your life, even your secular writing.